The word andenken, as the German equivalent of souvenir, appears only twice among letters and documents associated with the Mozarts and, significantly, refers in both instances to material objects. The first and only document from Mozart's lifetime is Leopold Mozart's letter to his wife from Rome of 14 April 177:

The second usage occurs in a reminiscence of Mozart by his sister, Nannerl, that appeared in the Allgemeine musikalische Zeitung for 22 January 1800: 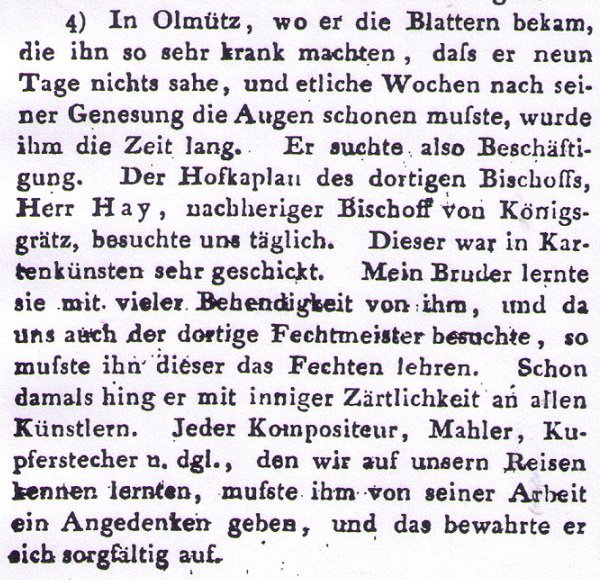 Since the word andenken was closely bound up with the notion of souvenir, and Leopold himself establishes a linguistic connection between the material object (the manuscript) and the immaterial object (the music), both the acquisition of relics and the giving of music autographs is an act of invoking a (future) memory and, following the eighteenth-century understanding of souvenir, of evoking feelings. These acts of memory and feeling inform music of various sorts: texted music, untexted music specifically composed for occasions or institutions intended to evoke memory and feelings, and in untexted music.

Among Mozart’s texted works, the word souvenir does not occur, only the word andenken, in the libretto to Der Schauspieldirektor K486:

But it is also implicit, if not explicit, in arias about memory loss and memory, as in the Countess’s aria ‘Dove sono’ from Le nozze di Figaro K492

Some untexted works, because of the institutions for which they were commissioned or composed, have explicit associations with memory, and in particular memory of loss, conjuring expressions of regret or sadness. These include the Masonic Mourning Music K477 and the music composed for the mausoleum dedicated to Field Marshall Ernst Gideon von Laudon, hero of the Siege of Belgrade (Adagio and Allegro K594).

Considering the material and immaterial nature of souvenir, the Mozarts’ explicit association between memory and musical objects (as in their gift of God is our Refuge K20 to the British Museum), and texted and untexted works composed for specific occasions that evoke memory, it is worth asking to what extent instrumental music not associated with any external event might similarly evoke or represent the notion of souvenir, including both memory and expression. Among numerous passages that might be understood this way, the first movement of the string quartet K590, composed in June 1790, is perhaps the most substantial.  It invokes memory, and presence and absence, as a means to evoke expression.

<   III Souvenir as object in eighteenth-century German and English texts I W. A. Mozart, Masonic Mourning Music K477   >
We use cookies to track usage and preferences in accordance with our Privacy & Cookie Policy. I Accept