Composer, violinist and theorist; father of W. A. Mozart. The son of an Augsburg bookbinder, Leopold Mozart matriculated at the Salzburg Benedictine University in 1737 but was expelled in September 1739 for poor attendance and a failure to show proper deference to his professors and the university establishment.  He then became a valet and musician to Johann Baptist, Count of Thurn-Valsassina and Taxis, Salzburg canon and president of the consistory. In 1743, Leopold joined the Salzburg court orchestra as fourth violinist; by 1758 he had advanced to the post of second violinist and in 1763 he was promoted to deputy Kapellmeister. During these years he composed prolifically; a contemporaneous account of the Salzburg court music, possibly written by Leopold himself ‘(Nachricht von dem gegenwärtigen Zustande der Musik Sr. Hochfürstl. Gnaden des Erzbischoffs zu Salzburg’), mentions a large number of symphonies, more than serenades, concertos for flute, oboe, bassoon, horn and trumpet, ‘countless’ trios and divertimentos for various instruments, ‘hundreds’ of minuets, opera dances and similar works, a dozen oratorios and ‘many contrapuntal and other church items’. References in the family letters show that Leopold Mozart considered himself a ‘modern’ composer and his extant works, both early and late, bear this out. It speaks for itself that several of his works were at one time thought to be compositions by Wolfgang. In addition to his music, Leopold’s violin tutor, the Versuch einer gründlichen Violinschule, published in 1756, the year of Wolfgang’s birth, was the most highly regarded violin treatise of the eighteenth-century; it was revised by Leopold for second and third editions published in 1769–1770 and 1787, respectively.  A Dutch translation appeared in 1766, and a French edition, by Valentin Roeser, apparently not authorized, in 1770.

Leopold Mozart married Anna Maria Mozart (née Pertl) on 21 November 1747; of their seven children only two, Maria Anna (‘Nannerl’, born 1751) and Wolfgang Amadeus (born 1756), survived to adulthood. While Leopold continued to compose and teach throughout the late 1750s and early 1760s, there is no doubt that he largely – though not entirely – gave up composition in order foster the talents of his children. What is more, he felt his responsibility to be not merely a father’s and teacher’s but a missionary’s as well; at least in part this was the motivation for the journeys that he undertook, at first with his entire family, but after 1769 chiefly with Wolfgang alone. During the 1770s, when the Mozarts travelled less and Wolfgang began to assert his independence, Leopold felt increasingly distant from Salzburg’s musical life; his isolation only deepened with the death of his wife in Paris in 1778, Mozart’s departure for Vienna in 1781, and ‘Nannerl’ Mozart’s marriage (and subsequent move to St Gilgen, a small town not far from Salzburg), in 1784.

Leopold Mozart died in May 1787. On the same day, Dominicus Hagenauer, Abbot of St Peter’s in Salzburg and a long-time family friend, noted in his diary:  ‘Leopold Mozart, who died today, was a man of much wit and wisdom, and would have been capable of good services to the state beyond those of music … He was born in Augsburg, spent most of his days in court service here, and yet had the misfortune always to be persecuted and was far less beloved here than in other great places of Europe.’

Leopold’s legacy to Wolfgang was both musical and intellectual. He was probably Mozart’s only teacher and cultivated the young composer’s talents assiduously and, to judge by his peers’ comments about him, successfully. He also encouraged Mozart to learn languages, to experience other cultures, and to be curious about the world around him. This is most evident from the letters Leopold wrote during the ‘Grand Tour’ of 1763-1766, which are just as much about the family’s encounter with the modern world as they are about his children’s musical accomplishments. 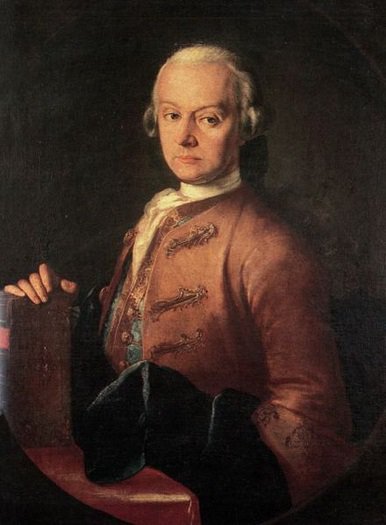 The Mozarts as Collectors of Souvenirs

The Mozarts as Producers of Souvenirs

Souvenir as object in eighteenth-century German and English texts

Surviving Souvenirs 1: Engravings of London purchased by, or given to, the Mozarts, 1764-5