Home > Souvenirs > The Mozarts as Producers of Souvenirs Introduction

Souvenirs were not new to the eighteenth century. Souvenir producing and collecting had a long history, originally of relics and other religious-related objects but later painted plates, wooden caskets, glasses and walking sticks from spas and, once archaeological digs became common, relics from antiquity.[1] Musical souvenirs, however — aside from portraits of composers and performers, often collected not just as souvenirs of acquaintance but also for personal artistic edification and inspiration — were uncommon.

Leopold Mozart appears to have been among the first musicians to produce a souvenir that served not only as a memento of a visit to a particular place, but also made of an immaterial object, a piece of music, a souvenir. His Der Morgen und der Abend den Inwohnern der Hochfürstl. Residenz=Stadt Salzburg melodisch und harmonisch angekündigt (Augsburg, 1759) includes not only works composed for a mechanical organ, the so-called Hornwerk at the Hohensalzburg fortress, first constructed in 1502, but also a brief history of the fortress. 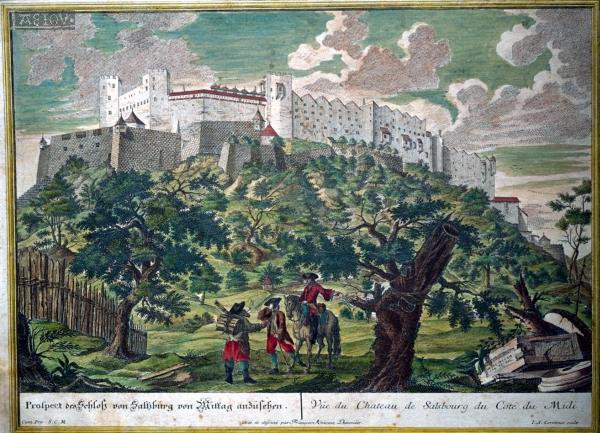 The first souvenir he produced of Wolfgang was an engraved portrait of the family — Wolfgang, Mozart’s sister Nannerl and Leopold performing — that was sold with Mozart’s earliest compositions and widely-distributed throughout the 1770s. By associating the portrait with a printed edition of Mozart's sonatas, and as a result making of the sonatas a souvenir as well, Leopold implicitly associates the material (the portrait and the printed edition) with the immaterial (music). The most striking example of this association is Mozart’s motet God is our Refuge K20, the autograph manuscript of which was given to the British Museum in July 1765. The Museum understood the manuscript, and with it the work, to be ‘musical performances’.

<   III Souvenirs purchased or acquired by the Mozarts that are lost I Leopold Mozart’s Musical Souvenir of Salzburg   >
We use cookies to track usage and preferences in accordance with our Privacy & Cookie Policy. I Accept