Home > Souvenirs > The Mozarts as Producers of Souvenirs > A Portrait of Mozart, his sister Nannerl and Leopold Mozart Performing 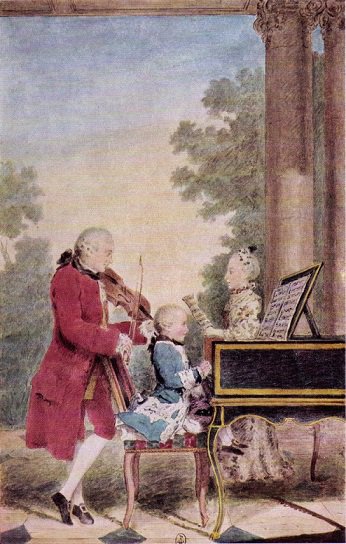 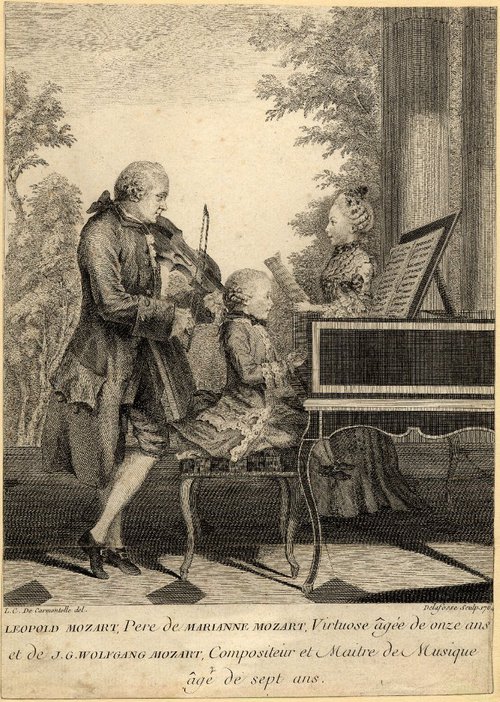 In Paris at the end of 1763, Leopold arranged for a portrait of his children Wolfgang and Nannerl performing with him to be painted by Louis Carrogis, known as Carmontelle. The painting was subsequently engraved, by Christian de Mechel, and sold together with Mozart’s earliest sonatas, K6-9. In London, in early 1765, the image was sold with prints of Mozart’s more recent sonatas, K10-15. Although the sonatas and engravings could be purchased separately, they were advertised in a way that encouraged buyers to acquire both.

The first work by this child, who was the admiration of all Paris last winter and has since been no less successful in London, contains the sonatas dedicated to Madame Victoire de France. The second contains the sonatas dedicated to the Comtesse de Tessé. The price of each work is 4 livres 4 sols, but only very few copies remain, the edition being out of print and the plates no longer in France.

Those who would like to join the portrait of the little author to the sonatas will find it at the same address. Price 24 sols. This child-master is seen on it playing the harpsichord, his sister at his side, looking at a sheet of music, and his father behind him, accompanying him on the violin; the resemblance is perfect. This plate is engraved after the picture by M. de Carmontelle.[1]