Engraver and art dealer. Mechel lived in Paris from 1757 before returning to his native Basel in 1764. In 1778 he was invited by Joseph II to reorganize the imperial picture gallery in Vienna for public viewing. 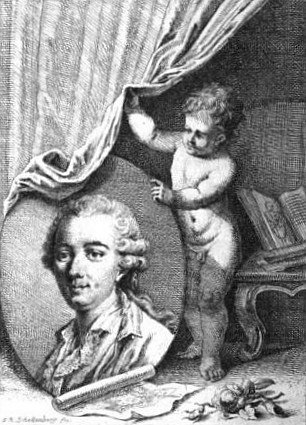 In early 1764, according to Leopold Mozart’s letter of 1 April 1764, an engraving of the Carmontelle Mozart-family portrait was produced by Christian von Mechel:

My children and my wife send their greetings to all. M. de Mechel, a copper-engraver, is working himself to death to engrave our portraits, which M. de Carmontelle (an amateur) has painted excellently well. Wolfgang is playing the harpsichord, I am standing behind his chair playing the violin, Nannerl is leaning on the harpsichord with one arm, while in the other hand she is holding music as if she were singing.

The engraving itself, however, is signed by Jean-Baptiste Joseph Delafosse. This engraved portrait was sold both separately and together with the printed editions of Mozart’s sonatas K6-9, in a slightly later English engraving with K10-15, and in Holland with K26-31.