Eduard Mörike’s 1856 novella Mozart on the way to Prague begins with a revelation. Mozart and his wife Constanze stop their coach and venture into the Bohemian forest: 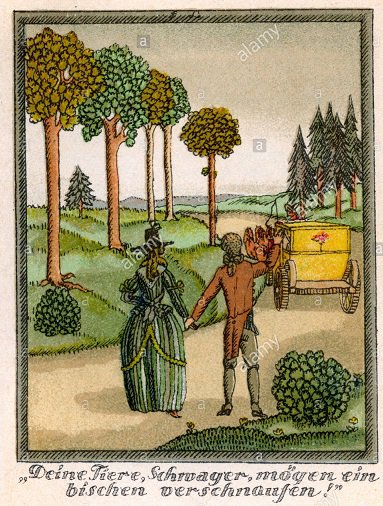 Mozart on the Way to Prague

They stepped arm in arm over the roadside ditch, and so at once deep into the gloom of the fir-wood, which soon deepened into a darkness pierced only here and there by a shaft of sunshine striking vividly down on the carpet of velvet moss. . .  ‘Good God! How glorious!’ he cried, gazing up at the lofty boles. ‘One might be in a church! I feel as though I had never been in a forest, and now I see for the first time what manner of thing it really is – this whole population of trees ranged side by side! No human hand planted them, they grew up all of their own accord, and here they stay for the simple reason that it is fun to be alive and carry on the business of life together. . . How many strange and beautiful things there are in the great world beyond, and how many here at home, of which I know simply nothing yet, in the shape of natural wonders, sciences, arts and useful crafts. . .’[1]

The point of this passage seems clear enough: Mozart’s awakening to the world around him signals his emergence as a proto-Romantic, a common view in the early nineteenth-century. But the passage also harbours a fundamental contradiction that has informed Mozart biography from at least the last years of the eighteenth century until today: the life Mörike describes is set in pre-revolutionary 1787, in the so-called Age of Enlightenment, yet his Mozart — at least to this point — is distinctly ‘unenlightened’, unacquainted with the world around him, uncritical and disengaged. In short, he belongs nowhere:  he is neither fully Romantic nor, what might be expected of his time, enlightened.

This Mozartean trope of disengagement, of not 'belonging', not only justified what was incorrectly seen as Mozart’s failure, practically speaking, to make his way in the world, but also gave rise to the idea — similarly current by the early years of the nineteenth century — that his music exists in some rarefied domain different from other composers'. It also implies that what was singularly and overwhelmingly important for Mozart was what he heard — his was a more or less exclusively musical life. What he experienced, what he saw is secondary: it is as if the details of his life — who he met, where he travelled, what he experienced — are a kind of travelogue of little importance to how we fundamentally understand the man and his music.

The evidence of the family letters, however, contradicts the idea that the Mozart family was disengaged from the world around them. And if that is the case, then material culture studies may offer an entrée into their understanding and experience of everyday life. At the very least, it represents a novel point of departure that may cast his life and works, and how we understand them, in a new light. The point of departure for this project is not what Mozart heard, but, in a sense, what Mozart saw and what he experienced: the beauties and vagaries of urban planning, whether the regular grid of streets in Mannheim, the flooding of the Place de Grève in Paris or the renovation of the Louvre facade; exotic animals, including zebras, in London in 1764 or 1765; fruits and vegetables not known in his native Salzburg, including watermelons, which he tasted for the first time in Italy in 1770; fashion, such as suits, coats, hats and accessories for women; and science and technology, including his visit to the Mannheim Observatory in 1778 and his notice of the first Viennese hot-air balloon flight by Blanchard in 1791.