Home > Souvenirs > The Mozarts as Collectors of Souvenirs Introduction

During their travels through western Europe (1763-1768) and in Italy (1769-1773), the Mozarts collected souvenirs of the people they met, and the cities, monuments, churches, palaces, natural wonders and tourist sites they visited. In part these souvenirs served to remind them later of their journeys—to evoke memories of where they had been and who they had met—and in part they were intended to be shown to friends and acquaintances to supplement their descriptions of the people and places they had seen with visual imagery and objects. 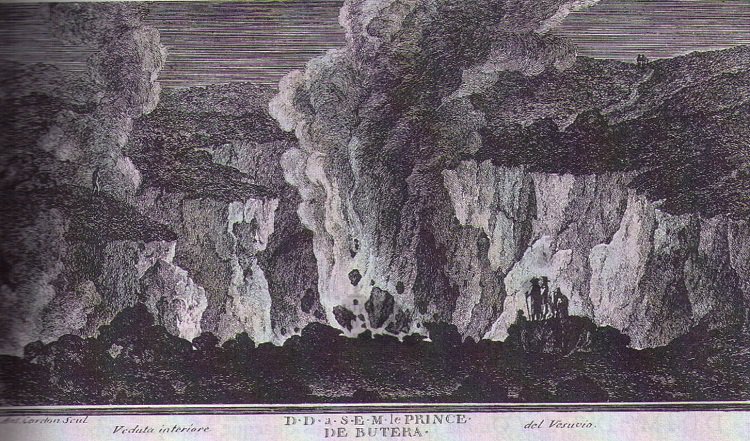 Between 14 May and 25 June 1770, Mozart and his father visited Naples. A major tourist site there—and one they were encouraged to visit by their acquaintance William Hamilton—was Vesuvius. Leopold first mentioned the volcano in a letter to his wife of 29 May 1770:

They had a better view of an eruption on 5 June, when Mozart wrote to his sister,  ‘Smoke is pouring out of Vesuvius today, odds fish and zounds,’ and they visited the volcano on 18-19 June, when Leopold Mozart wrote:  ‘On Monday and Tuesday etc. we`re going to take a closer look at Vesuvius, Pompeii and Herculaneum—the towns that are currently being excavated—and admire the curiosities that have already been discovered and also take a look at Caserta etc. and Capo di Monte etc.’  Earlier, on 8 June, Leopold had reported to his wife,

The lava they acquired does not survive and is known, like some other souvenirs acquired by, or given to, the Mozarts on their tours through Europe - including city- and landscape engravings from Paris and Rome, religious relics, and a portrait of King Ferdinand IV of Naples - only from its descriptions in the Mozart family letters. Others, however, and in particular topographical engravings from London and Naples, survive at the Salzburg Museum.

<   IX 1791, Vienna : Pierre Blanchard's hot-air balloon I Surviving Souvenirs 1: Engravings of London purchased by, or given to, the Mozarts, 1764-5   >
We use cookies to track usage and preferences in accordance with our Privacy & Cookie Policy. I Accept