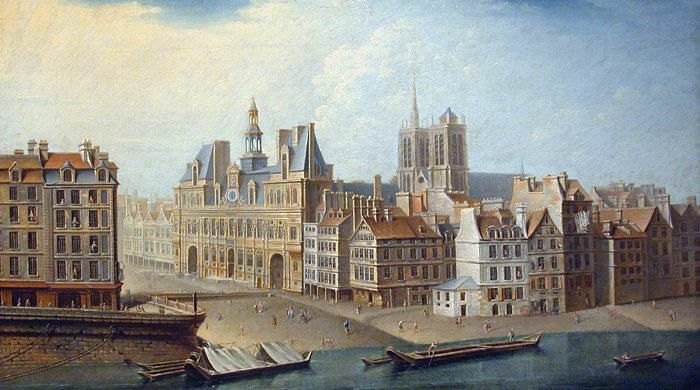 Leopold Mozart to Johann Lorenz Hagenauer, Paris, 22 February 1764:
The Place de Grève (from 1802 the Place de l'Hôtel-de-Ville) was best known during the eighteenth century and earlier as a public meeting place and in particular the site of public executions.[1] The nineteenth-century embankment that now separates the Place de l'Hôtel-de-Ville from the Seine was built as part of Georges-Eugene Haussmann’s renovation of Paris; during Mozart’s time, the river directly abutted the square.

[1] See Leopold Mozart's letter to Johann Lorenz Hagenauer, Paris, 4 March 1764: 'Here the Place de Grève is where criminals are dispatched to the other world. Anyone who is a lover of these executions has something to see almost every day. Recently a serving girl, cook and coachman were hanged together side by side. They served a blind rich widow from whom they had stolen 30000 Louis d’or.'