Home > Project Information > About the project

This site has its origins in a series of podcasts aired by the BBC in 2011, A History of Mozart in a Dozen Objects. It seemed to us then that Mozartean biographical traditions – broadly understood – inhibited rather than enhanced our understanding of the composer, and that an approach to his life and works based on material culture, on Mozart’s engagement with everyday life and the objects of everyday life, might be the basis for new biographical and interpretative paradigms.

This pilot project represents a first attempt to explore the potential of this idea through an online, multi-media publication, including text, images, documents and sound files, and to suggest a framework for presenting a more rounded portrait of Mozart, both personally and as a musician, in his time and place(s). Among the topics a future iteration of this site may include are Mozart’s library, his traveling tea chest, an eighteenth-century blood-letting device and Mozart’s sticking plaster, a window from one of Mozart’s flats in Vienna, an executioner’s sword from Salzburg, Mozart’s watch and his telescope.

We begin, though, with souvenirs, including souvenirs the Mozarts collected on their early travels – chief among them topographical engravings acquired in London and Naples - and souvenirs that the Mozarts produced themselves – including an early engraving of the Mozart family performing and the autograph manuscript of the motet God is Our Refuge K20, that Mozart presented to the British Museum in July 1765. There are several reasons to begin with souvenirs: it has gone unremarked in biographies of Mozart that the family were avid purchasers of souvenirs as remembrances of where they had visited, what they saw and who they met (and as objects they could show off back home when describing their travels to family and friends); and it has gone unremarked that some of Mozart’s earliest works were composed either specifically as souvenirs (K20) or were sold as, or in conjunction with, souvenirs of the composer – this in itself provides insight into the marketing of music, and the marketing of a child prodigy, in the eighteenth century.

But there is more to souvenirs than collecting or marketing. Souvenirs, though material objects, also had a strong association, in eighteenth-century thought, with memory and feeling, as a survey of usages of the word in French, German and English shows. And since the Mozarts themselves suggest an intimate relationship between the material object (for example, Mozart’s autograph of God is Our Refuge) and its immaterial substance (the music itself), it seems to us that this may offer a new insight into how musical works, whether vocal or instrumental, that apparently evoke both memory and feeling, might be understood. In short, souvenirs as a topic of study engages not only with eighteenth-century travel, the marketing of eighteenth- century music, the Mozarts early travels and their promotion of Wolfgang specifically but also, how Mozart’s music could be, or might have been, understood from this particular perspective.

To that end, these pages include a variety of images, sounds and texts representing a progression from souvenirs owned by the Mozart, to the souvenirs they produced, meanings of the word itself, and to specific works we may, as a result, re-evaluate. Images predominate in this iteration, though future iterations will significantly include both sound and video; the sound and video material included here are intended as proof of concept. By way of justifying not only the idea of souvenirs but also the larger idea behind the site, we begin with a biography of Mozart, to set the stage so to speak, and a rationale for thinking about Mozart in terms of material culture based on what he saw rather than – as traditional biographies would have it – what he heard.

Accordingly, we have structured this site in chapters: Biography – What Mozart Saw – The Mozarts as Collectors of Souvenirs – The Mozarts as Producers of Souvenirs – Eighteenth-century Understandings of the Word and Idea Souvenir – and Souvenir and Expression in Mozart’s Music. In future iterations, the biography and introduction (What Mozart Saw) will remain as points of entry. But the chapters on souvenirs will become a larger chapter with subchapters while other large chapters, similarly structured with subchapters, will deal with the topics mentioned above.

One distinctive feature of this site is its entity structure. Wherever possible – and certainly with respect to the main chapters – links have been added to databases documenting and providing further information concerning persons, places, institutions, objects, events, themes, musical works and source material. A further database includes a bibliography of works cited. We have made no attempt here to cross reference every person or place mentioned in the text. This being a pilot project, several of the entity types appear only as 'proof of concept'.  An extended and more complete ‘Mozart and Material Culture’ publication would, of course, be much more fully annotated.

Sources require special mention here. While for the most part we have given only basic information concerning them, in the case of two letters – 14 April 1770 and 21 August 1770 – we have given fully annotated versions. Chiefly this is to give an idea of how this site might eventually serve as a repository for a new edition of the family correspondence. But it is also intended to demonstrate and suggest a way to exploit what is one of two primary sources for ‘Mozart and Material Culture’. The other primary source is Mozart iconography and, similar to letters, three iconographical entries, ‘Portraits of Mozart’, are intended to demonstrate how a new, complete iconography might be structured. Indeed, ‘Mozart and Material Culture’ is only one part of what this project hopes eventually to become. In order fully to promote a new view of Mozart, it is necessary to understand the source underpinning for it – or for that matter, the source underpinning any serious research into Mozart and his life and times. Put schematically, Mozart scholarship is a kind of pyramid, the base of which consists of the letters, documents, musical sources and the iconography: 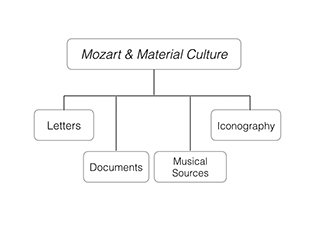 There is an urgent need, in any case, for modern editions of both the letters and the iconography. While the musical sources are now for the most part well understood thanks to the publication of the Neue Mozart-Ausgabe and the forthcoming new edition of the Köchel catalogue of Mozart’s works, the most recent edition of the letters (Kassel: Bärenreiter, 1962-1975) is close to fifty years old and sorely out-of-date. Similarly, the iconography (Maximillian Zenger and Otto Erich Deutsch, Mozart und seine Welt in zeitgenössischen Bildern [Kassel: Bärenreiter, 1961]) is nearly sixty years old and based primarily on pre-war research. Mozart documents, too, require substantial revision. The standard collection (Otto Erich Deutsch, Mozart. A Documentary Biography [London: Black, 1965; second edition 1966] needs to be supplemented by well over a hundred new documents discovered in recent years (for a comprehensive, though not complete edition of newly-discovered documents, see here).

A complete ‘Mozart and Material Culture’ site would include not only an updated edition of the letters and the iconography but also incorporate, in the annotations, a new edition of the documents.