Musican and sister of W. A. Mozart. A child prodigy, she was involved in the family's concert tours of 1762-1769; she won high praise for taste and execution in keyboard performance but, unlike Mozart, was not presented as a composer although she was given a rudimentary education in composition as references in the family letters show; during the 1770s and early 1780s she gave keyboard lessons to several of the daughters of the Salzburg nobility. Until Mozart moved to Vienna in 1781, he and Nannerl were close. She married Johann Baptist Bechtold von Sonnenburg on 23 August 1784 and moved to St. Gilgen, where Sonnenburg was an administrator; they had three children: Leopold Alois Pantaleon (1785-1840), Johanna (`Jeanette`, 1789-1805), and Maria Babette (1790-1791).

Nannerl played a significant role in the development of Mozart biography after Wolfgang`s death in 1791, in part through reminiscences she wrote in the spring of 1792, and was instrumental in providing the publisher Breitkopf & Härtel with copies of some of Mozart's as-yet unpublished works. 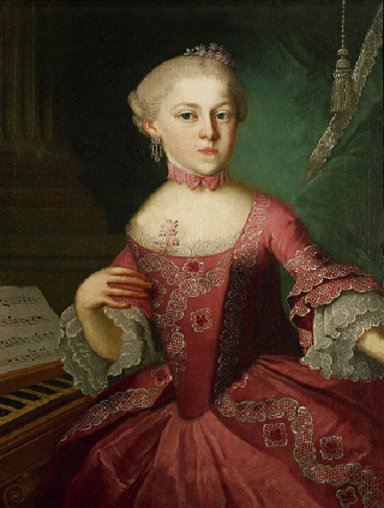 Surviving Souvenirs 1: Engravings of London purchased by, or given to, the Mozarts, 1764-5