Composed in memory of two of Mozart's Masonic brothers, Georg August von Mecklenburg and Franz Esterhazy. The circumstances surrounding the composition and performance of the Masonic Mourning Music are unclear. The date July 1785 given in Mozart’s thematic catalogue cannot be correct if, in fact, it was composed, as the catalogue notes, ‘bey dem Todfalle der Brbr: Mecklenburg und Esterhazy’: Georg August von Mecklenburg-Strelitz, a major general in the imperial army, died only on 14 November 1785 while the other dedicatee, Franz Esterházy von Galántha, Grand Master of Mozart’s lodge, died only on 7 November. Philippe Autexier speculates that the work existed in an earlier, texted version. It is possible, however, that the date in Mozart’s catalogue is wrong: the next item in it, the piano quartet K478 is also dated ‘July’ in the catalogue but 16 October on Mozart’s autograph. 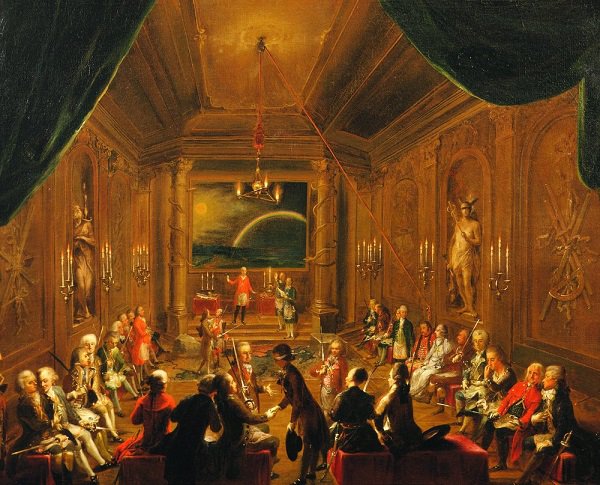 Landon 1983 suggests that the figure at the bottom right might be Mozart.

For an interpretation of K477 as expressing ideas of souvenir and memory, click here.