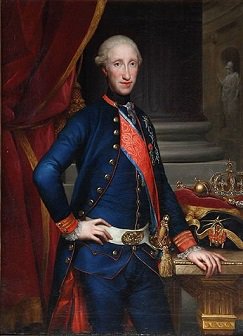 Mozart and his father visited Naples from 14 May-25 June 1770, at which time they not only performed and visited the opera but also took in the local sites at Vesuvius, Pompeii, Herculaneum and around the Bay of Naples. Leopold grew increasingly fond of the city, some reservations notwithstanding, as he wrote to his wife on 26 May:

I find the town`s position more pleasing with every passing day, and in general I think it`s not at all a bad place. If only the people weren`t so godless and if only certain individuals, to whom it never occurs to think that they`re stupid, weren`t in fact as stupid as they are. And the superstition! - - This is so deeply rooted that I can say with some certainty that heresy is now completely entrenched here, a state of affairs that is viewed with some indifference.

Leopold expected to be presented to Ferdinand IV during the last week of May but according to his letter of 30 June, written after he and Wolfgang had returned to Rome, nothing came of it:

Have we performed for the king? - - Anything but! We`ve got no further than the empty compliments paid to us by the queen wherever she`s seen us. The queen can do nothing, and it`s better to tell you in private what sort of a person the king is, rather than describing it in writing. You can easily imagine what goes on at this court. The young violinist, La Motte, who is in the service of the empress [Maria Theresia] and who came to Italy on her instructions and at her expense, spent a long time in Naples and delayed his departure by 3 weeks because he`d been told that the king and queen would hear him: but in spite of this, nothing happened. In due course I`ll tell you a whole series of amusing things about this court.

A few weeks earlier, on 5 June, Mozart had written to his sister: ‘The king has had a rough Neapolitan upbringing and at the opera he always stands on a footstool so that he looks a bit taller than the queen, the queen is beautiful and polite, having greeted me at least six times in the friendliest manner on the Molo (that`s a drive).’

Souvenirs purchased or acquired by the Mozarts that are lost