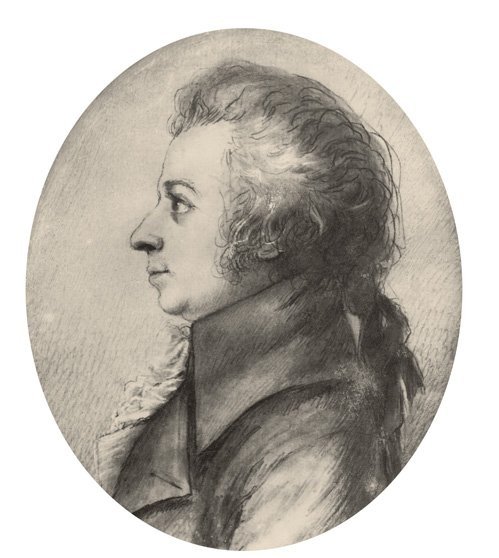 While widely accepted as an authentic portrait of Mozart[1], a silverpoint etching by Doris Stock, said to have been executed during Mozart’s visit to Dresden in 1789, is nevertheless problematic. Otto Erich Deutsch states as fact that ‘On 16 or 17 April [1789] Mozart visited the consistorial councillor Christian Gottfried Körner, whose sister-in-law Doris Stock did a drawing of Mozart.’[2] Yet there is no reference in Mozart’s letters to Körner or Stock, and the earliest accounts of his acquaintance with them date from almost a century later. Friedrich Förster reported in 1879 that Mozart visited the Körner household at least once during his visit to Dresden and played selections from Don Giovanni for them[3] while a few years earlier, in 1871, Gustav Parthey reported from Doris Stock’s memoirs:

There is no corroborating evidence for either account, and Doris Stock’s self-serving version singularly fails to mention a portrait. Whether Mozart was an almost daily visitor at Körner’s is also open to question: the composer arrived at Dresden about 6 o’clock on the evening of 12 April and went more or less directly to visit the singer Josepha Duschek at the home of the war secretary Johann Leopold Neumann; on 13 April he gave a private concert at the ‘Hotel de Pologne’ where he was lodging; he played at court on the evening of the 14th and went to the opera (Domenico Cimarosa’s Le trame deluse) on the 15th; and he departed on the 18th. None of this rules out the possibility that Mozart and the Körner’s were close or that he visited them during the day: dinner at the time was a mid-day meal and most of Mozart’s engagements were in the evening. But it does suggest that Deutsch’s dating of the portrait specifically to 16 or 17 April is not based on any positive evidence but on the fact that these are the only two days during Mozart’s stay in Dresden when his whereabouts cannot to some extent be accounted for.

A slip of paper formerly attached to the back of the picture, but now lost, complicates matters. When it was removed from the etching sometime in the early twentieth century, it was shorn of its left, and part of its right, sides; as a result, the facsimile edition ‘reconstructs’ what is believed to be the original text. Yet it was not necessary to guess what the missing text might have been: the entire slip of paper had been transcribed as early as 1899, in Emil Vogel’s article on Mozart portraits, before some of the text was lost.[5]

Much of the attempted reconstruction is accurate enough although at least two details of the original text, different from the reconstructed text, are significant. First, the slip was not written in the early nineteenth century, close to the execution of the portrait, as Geffray claims[6], but at third-hand, in 1859, some seventy years after the event it purports to document — and, as it happens, a year after an engraving based of the portrait, said to be of Mozart, had already been published. What is more, Förster cannot necessarily be considered a reliable witness; he was later exposed as having falsified the historical record in his history of the life and poetry of Theodor Körner[7]. Second, and perhaps more importantly, the original slip of paper states that the etching was executed in 1787, not 1789. Yet Mozart wasn’t in Dresden in 1787 and Stock, as far as we know, wasn’t in Vienna or Prague[8].

There is, accordingly, no unequivocal contemporaneous evidence that Mozart, Körner and Stock met in Dresden in 1789; the surviving prose accounts of their alleged meetings say nothing about a portrait; the date for its presumed execution is fixed only by our lack of knowledge of Mozart’s whereabouts on two days during his stay in Dresden; and the best information we have, the slip of paper formerly attached to the etching, is third-hand and contradicts the presumed date of 1789 for the etching’s execution, suggesting instead a date, 1787, that is biographically impossible. None of this is to say that the Stock is not Mozart. It may well be. But insofar as the evidence is concerned, there is little reason to believe it must be what it is purported to be.

The Stock portrait is also included in the Mozart Portraits theme.

[7] John Stone and Louise Williams, ‘Portraits of Mozart. Revising the Iconography’, Apollo: The International Magazine of the Arts 34/357 (November 1991), 314.

[8] Christoph Grosspietsch, ‘Die späten Mozart-Bildnisse (um 1789) von Posch, Stock und Lange’, Mozart-Jahrbuch 2009/2010, 49, dismisses the contradiction out of hand, suggesting that the date 1787 on the Zettel may simply be an error, either of the now-lost original or Vogel’s transcriptions of it.