The Mozarts were surrounded by art: in their home and the homes of their friends and acquaintances, at mansions and palaces they visited, at churches and other religious institutions, at inns and taverns and even on the street, including ballad sheets and other engravings hawked by itinerant merchants or established tradesmen. Some of their letters explicitly describe the art they saw: Leopold marveled at the Flemish and Dutch art the family saw in Brussels, Antwerp and elsewhere. And in 1778, Mozart’s mother, Anna Maria, took it upon herself to visit the gallery at the Palais Luxembourg in Paris, the first public art gallery in France. 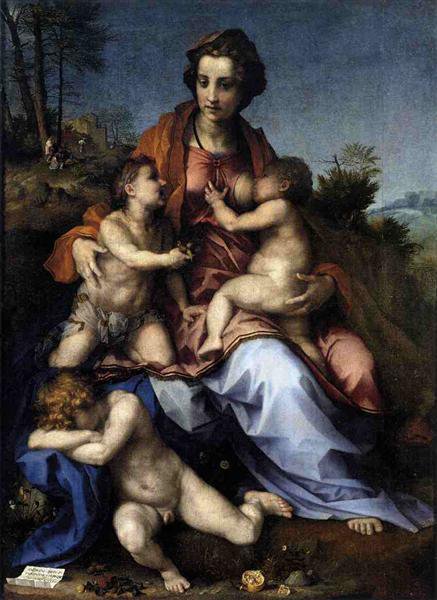 Andrea del Sarto, Charity, 1518, exhibited at Palais Luxembourg from 1750 and seen by Anna Maria Mozart in 1778 (now Paris, The Louvre)

Most of what the Mozarts saw, however, is not mentioned in the letters although it can be reconstructed from early documents such as the estate inventories and the history of museums and other institutions Mozart visited or frequented, including the ceiling frescoes, tapestries and paintings that adorned the archbishop’s residence in Salzburg, the art that ornamented the palace of Versailles or the Brussels cathedral or the Hofburg in Vienna, among many others. Given Mozarts’ widespread exposure to art of all sorts, their experiences were both varied and nuanced, historical and modern, aesthetic or utilitarian, and intersected with the broader cultures they lived and worked in or visited.

The Mozarts stopped at Leuven (Louvain) for one day, 4 October 1763. Later that month, after their arrival in Brussels, Leopold wrote to Johann Lorenz Hagenauer (letter of 17 October-4 November 1763):

According to Mozart. Breife und Aufzeichnungen (v.85), this painting was the middle panel of an altar by Dirk Bouts commissioned in 1464. 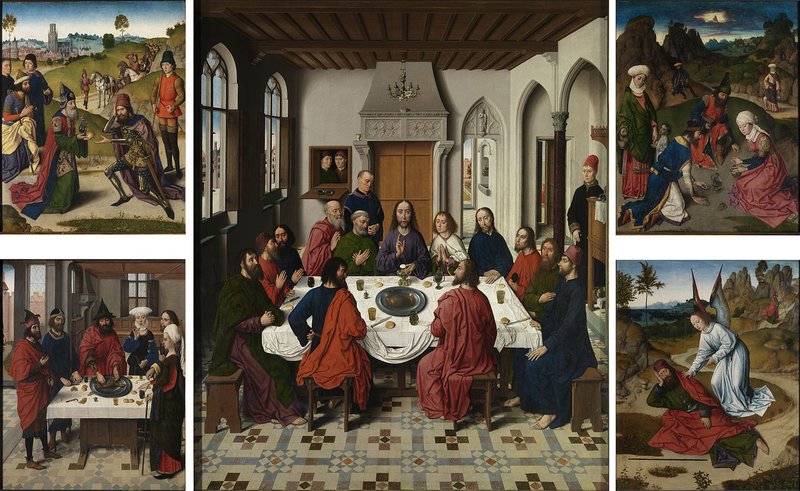 In fact, the wings of the Bouts triptych were sold prior to the Mozarts’ visit there and the central panel representing the last supper removed from its altar to form part of a framed montage of early painting decorating the space above the entrance to the sacristy of the Confraternity of the Holy Sacrament[1].  The painting Leopold admired was probably the altarpiece by Victor Honoré Janssens (1658-1738) that was commissioned to replace the Bouts. The Janssens is now lost but is described in Jean-Baptiste Descamps, Voyage pittoresque de la Flandre et du Brabant, Avec Réflexions relativement aux Arts & quelques Gravures (Paris, 1769), 102:

In his letter from Brussels dated 17 October-4 November 1763, Leopold wrote to Johann Lorenz Hagenauer: ‘I can’t stop thinking about a painting by Rubens that’s in the main church. In it Christ can be seen handing the keys to Peter in the presence of other apostles[2].  The figures are life-size.’ 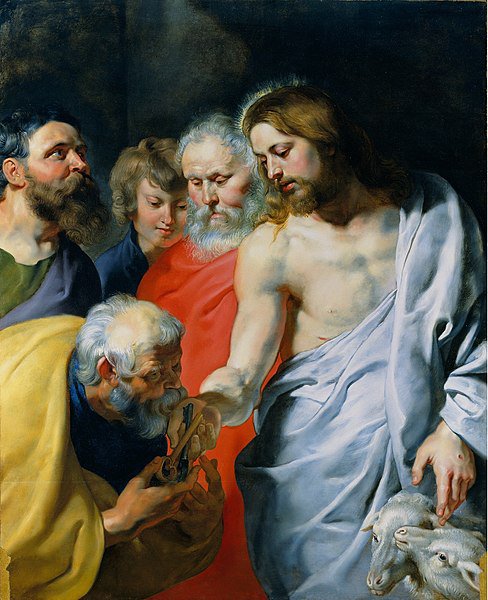 Painted c1616, Rubens’s Christ’s Charge to Peter, now at the Wallace Collection, London, was acquired by Richard Seymour-Conway, 4th marquess of Hertford (1800-1870) in 1850; it subsequently passed to Julie-Amélie-Charlotte Castelnau, Lady Wallace, widow of Sir Richard Wallace (1818-1890, believed to be the illegitimate son of Richard Seymour-Conway,) who in 1897 bequeathed it to the nation[3].

The painting, commissioned for the tomb of Nicholas Damant (c1531-1616) at the Kathedraal van Sint-Michiel en Sint-Goedele, Brussels, conflates two biblical episodes: in the Gospel according to St John (xxi:15-17), Christ demands that Peter ‘feed my sheep’; in the Gospel according to St Matthew (xvi:13-19), Christ promises to present Peter with the keys of the Kingdom of Heaven[4].  It was considered one of the chief masterpieces at the cathedral. According to Jean-Baptiste Descamps, Voyage pittoresque de la Flandre et du Brabant, Avec des Réflexions relativement aux Arts & quelques Gravures (Paris, 1769), 57:

On 19 September 1765, Leopold Mozart wrote to Johann Lorenz Hagenauer from The Hague, describing the family’s visit to Antwerp during the second week of September: 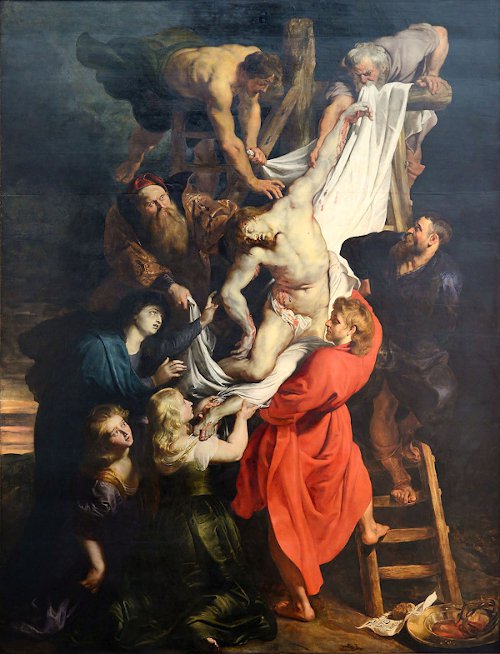 Rubens’s Descent from the Cross, commissioned in 1611 by the Antwerp Confraternity of Arquebusiers, is the central panel of a triptych at the Onze-Lieve-Vrouwekathedraal, Antwerp. Completed in 1614, it was a significant attraction for tourists and art lovers from the seventeenth century on. A description from Mozart’s time can be found in An Accurate Description of the Principal Beauties, in Painting and Sculpture, belonging to the several Churches, Convents, &c.in and about Antwerp. Together with a General Account of the Site, Fortifications, Streets, and Buildings of that ancient City; and an Historical Detail of the memorable Events which have happened to it, from its Foundation to the present Time (London, 1765), 8-9:

Increasingly throughout the eighteenth-century, portraiture, whether institutional or personal, for reasons of state or merely private ownership and contemplation, was seen as an important art form. In 1732, Anthony, earl of Shaftesbury, described portraiture as primarily a mimetic art, the accurate rendering of a sitter’s social status through his or her physiognomy and dress and a representation of the sitter’s property or other symbols. By century’s end, however, William Hazlitt claimed for portraiture a representation of the ‘essence of the sitter, reflect[ting] his thoughts and feelings, the capturing on canvas of subjectivity.’ 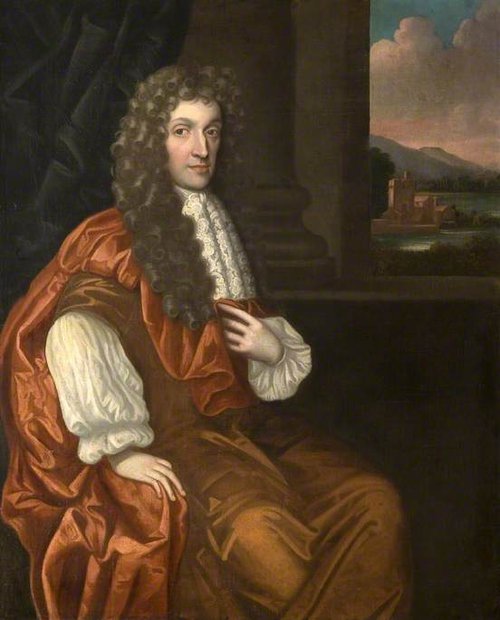 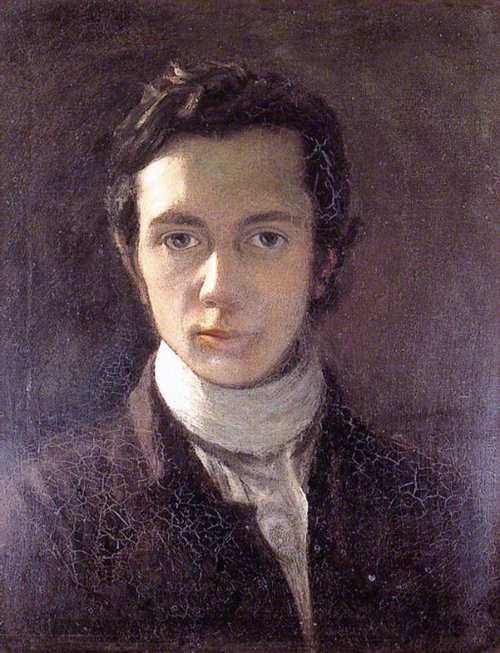 Some of the portraits seen by the Mozarts, especially those in the homes of the nobility, conformed to the earl of Shaftesbury’s notions about portraiture. Others, however, and in particular portraits of Mozart himself executed in the 1780s, are informed by Hazlitt’s view. Consequently, the different portraits seen or collected by the Mozarts meant different things to them. Some were aides-mémoires of their travels (such as the portrait of Ferdinand IV of Naples or the topographical engravings they collected in Italy); some were personal mementoes of their family life, such as the family portrait executed 1779/1780, possibly by Della Croce; and some, such as portraits of Madame Pompadour and Louis XV, they saw as manifestations of royal wealth and privilege, as expressing something, in this particular case about French society, just as portraits of other monarchs reflected on their wealth and privilege. 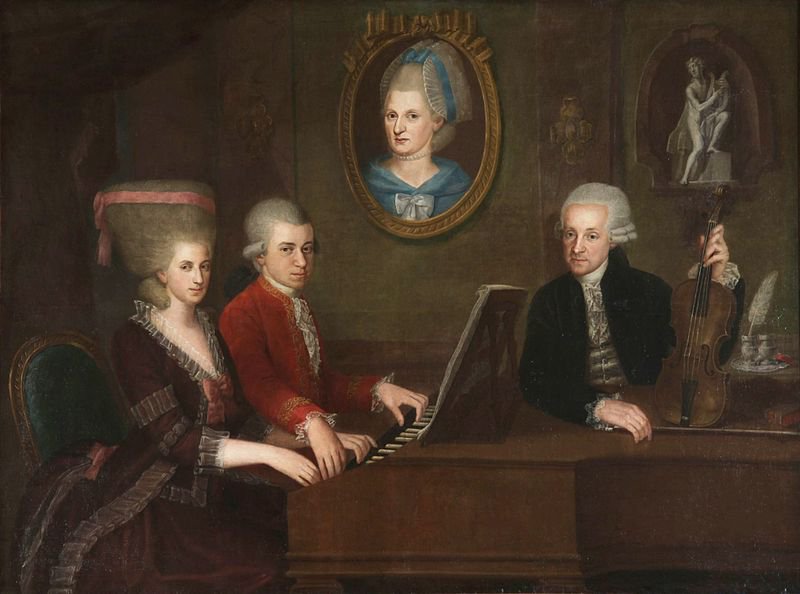 On 1 February 1764, Leopold wrote to Salzburg from Paris:

Considering that Leopold was able to describe in some details two portraits as well as Madame Pompadour’s harpsichord, the Mozarts must have visited Madame Pompadour’s mansion at 55 rue du Faubourg Saint-Honoré (now the Élysée Palace) sometime in late 1763 or early 1764. The life-size portrait of her may be the one executed by Maurice-Quentin de La Tour c1756 (Louvre, Paris). 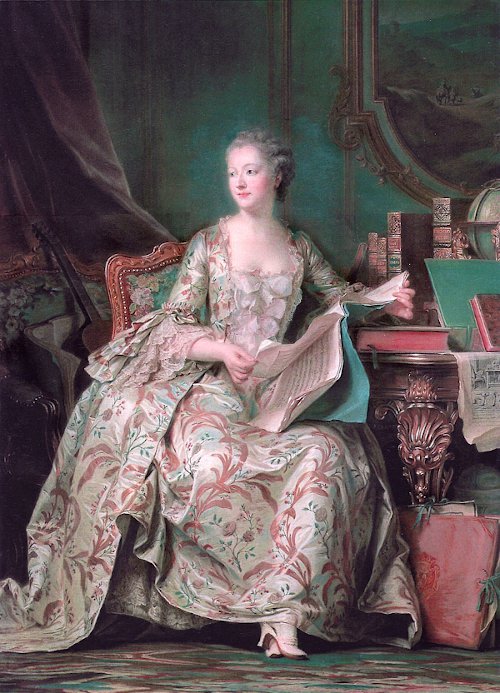 With respect to the portrait of Madame Pompadour, the Louvre notes:

Madame Pompadour’s clavecin can be seen in a portrait by François Boucher, also at the Louvre: 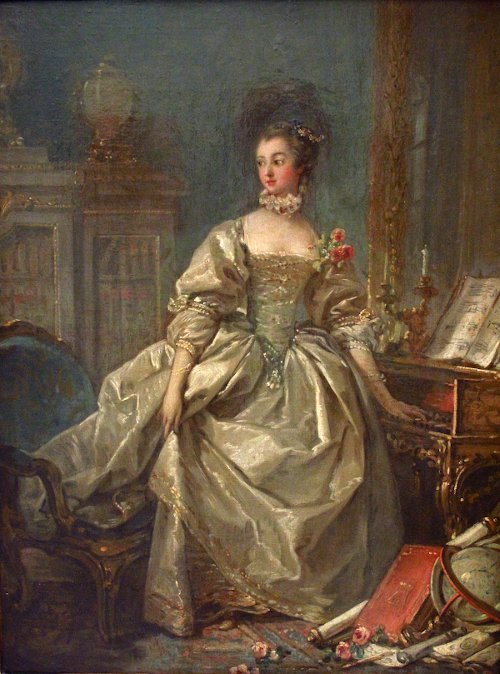 The portrait of Louis XV, executed by Jean-Baptiste van Loo c1723, is now at Versailles. 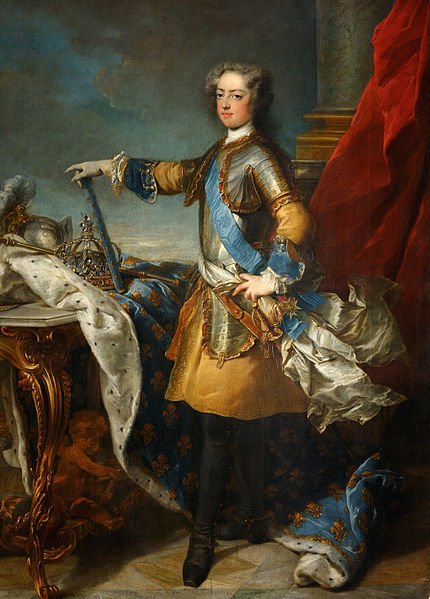 [2] Christ's Charge to Peter (c1616), commissioned for the tomb of Nicholas Damant (c1531–1616) in the collegiate of SS Michel and Gudule, now at The Wallace Collection, London.

[3] For a history of the Wallace Collection, see https://www.wallacecollection.org/collection/history-collection/.

[5] Onze-Lieve-Vrouwekathedraal; the organ on which Mozart played does not survive.

[9] The portrait of Madame Pompadour by François Boucher executed in 1758 (now at Alte Pinakothek, Munich); the portrait of Louis XV was probably that by Jean-Baptiste Van Loo, 1723/1724 (Versailles).