Food and drink are recurring themes in the Mozart family letters and in their lives, whether traveling in London, Paris or Italy, at home in Salzburg and, for Mozart, later in Vienna. Leopold was taken with English roast beef and beer and enchanted by Italian fruit. In a letter to his wife, Constanze, dated 8-9 October 1791, Mozart writes, ‘I have just swallowed a delicious slice of sturgeon which Don Primus (who is my faithful valet) has brought me’ and, later in the same letter, ‘I really enjoyed the half of a capon that friend Primus brought back with him.’

But it was not just taste that interested the Mozarts. Food had cultural interest and implications for them as well, including the ways eating habits structured everyday life or its religious implications. It was in part for religious reasons – the differing intersection of food and religion as Leopold practiced it in Salzburg – that French food did not sit well with the Mozarts. Leopold wrote from Paris on 4 March 1764: 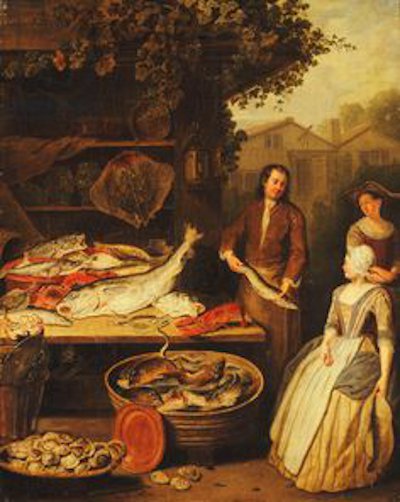 In a letter to Johann Lorenz Hagenauer of 8 December 1763, Leopold Mozart wrote: 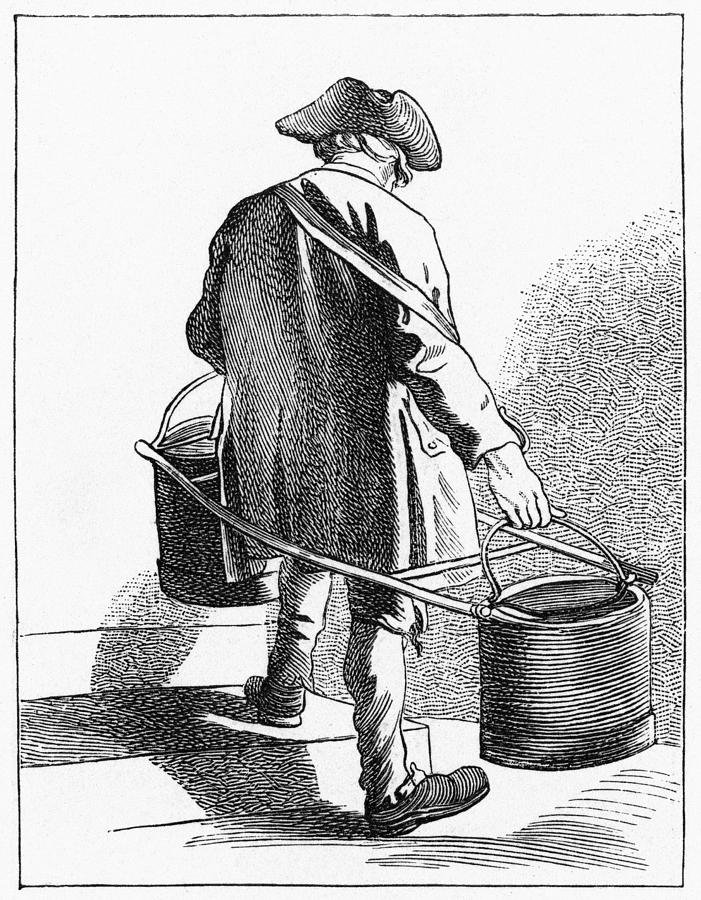 Unlike London, where pipes were being installed to carry water from the Thames throughout the city, Paris relied on water carriers well into the 1810s. They were monitored by the police and paid the city for the right to fill buckets at public fountains and from the Seine; generally, they received 2 or 3 sous per bucket. A near-contemporaneous account of Parisian water, in Louis-Sébastien Mercier Le Tableau de Paris (Paris, 1781) confirms Leopold’s description, including its deleterious effect on foreigners: 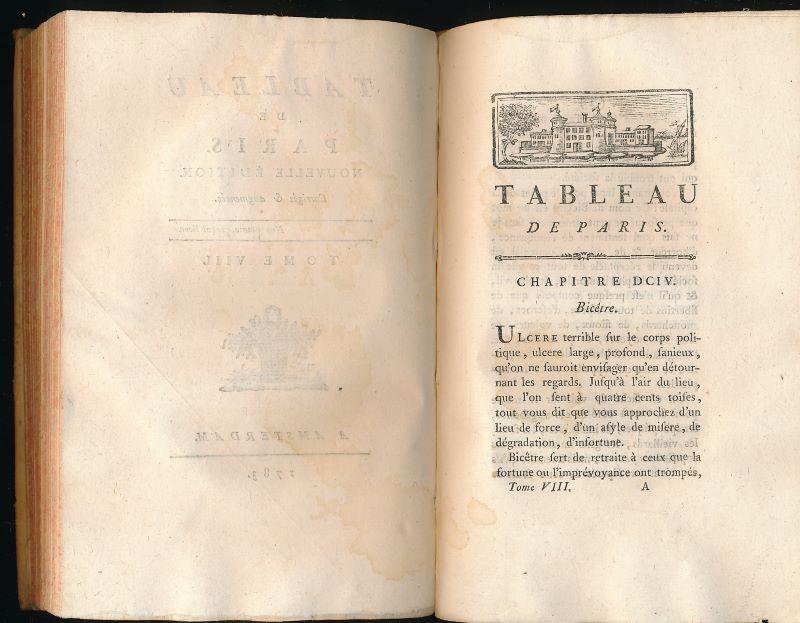 Among the numerous recipes for roast beef published in the eighteenth-century, Catharine Brooks’s from her The Complete English Cook[7] is typical: 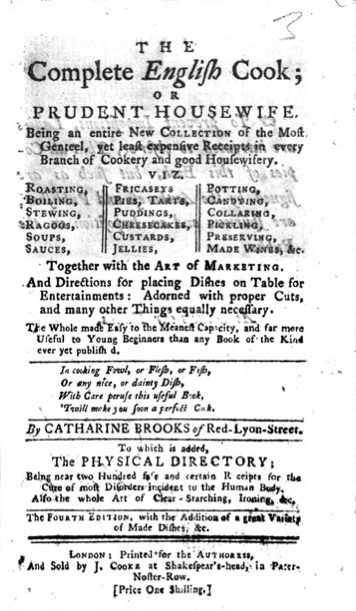 It is not out of the question that Leopold knew of the cultural importance of roast beef or that he and his family at some time during their stay in London heard the popular patriotic ballad Oh! The Roast Beef of Old England, written by Henry Fielding for his play The Grub-Street Opera and popularized in a setting by Richard Leveridge (1670-1758):[8]

To listen to Oh! The Roast Beef of Old England, click here: 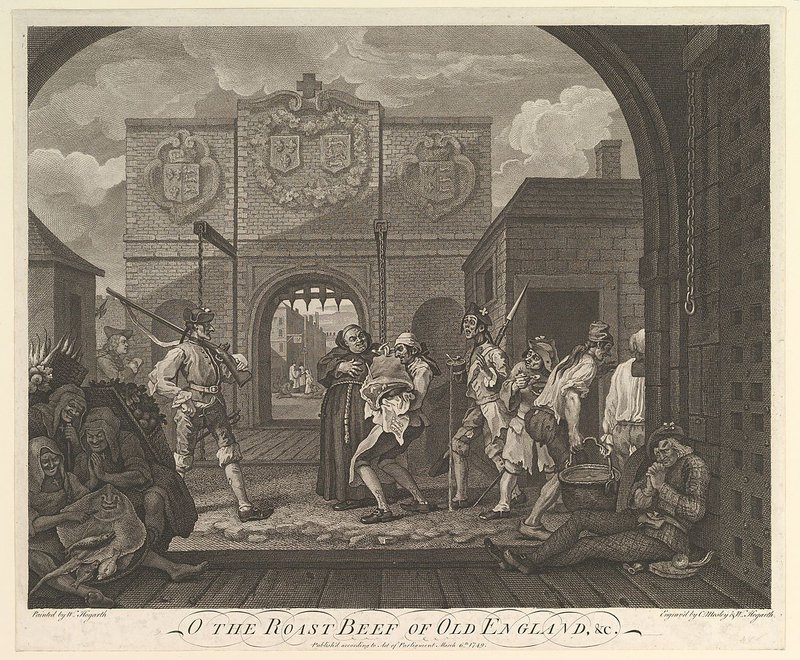 It is less likely that Leopold understood all of its implications, however, for while it explicitly condemns the influence of French taste and fashion in both food and dancing (and is in part a reaction to the derogatory eighteenth-century reference to the English as rosbif by the French), it more generally ridicules Catholicism. At least this was one of the points of William Hogarth’s 1748 painting The Gate of Calais or O, the Roast Beef of Old England (published as a print in 1749; the original is now at the Tate Britain, London): ‘The fisherwomen wearing crucifixes on the left seem to pray to the cheap flat fish in front of them. In the background, through the gate, 'superstitious' locals are kneeling before the Cross, beneath a tavern sign of a dove, symbol of the Holy Ghost, in Hogarth's mockery of the Eucharist. More earthly nourishment, however, comes in the form of the unattainable sirloin of British beef.' (Tate Britain website: to find reference click here.)

Hogarth’s print gave rise to a further ballad, Change of Diet. A Ballad: being a Sequel to the Roast Beef of Old England, 1757: 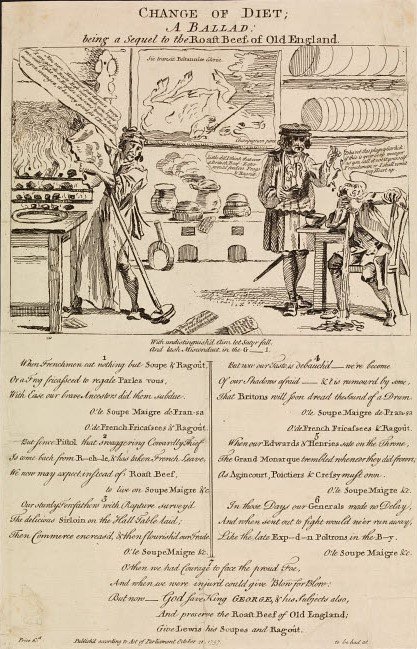 7
O’then we had Courage to face the proud Foe,
And when we were injur’d could give Blow for Blow:
But now —God save King GEORGE, & his Subjects also,
And preserve the Roast Beef of Old England;
Give Lewis his Soupes and Ragoût.

Publish’d according Act of Parliament October 21, 1757.

[4] Translation from the English edition of Mercier, published as Paris: Including a Description of the Principal Edifies and Curiosities of that Metropolis (London, 1817), 33.

[5] A Habsburg light infantry unit that first saw duty in 1741 during the War of the Austrian Succession; the term has its origin in Croatian, via Hungarian, and at first referred to guards protecting crops before coming to mean guards more generally.

[6] ‘Rosolie’ in the original. The word ‘rosolio’ for rose liqueur was not commonly used in English until the end of the eighteenth century; see OED Online. March 2020. Oxford University Press. https://www.oed.com/view/Entry/167629?redirectedFrom=rosolio& (accessed March 28, 2020).

[7] Catharine Brooks, THE / Complete English Cook; / OR, / PRUDENT HOUSEWIFE. / Being an entire New COLLECTION of the most Genteel, yet least expensive Receipts in every Branch of Cookery and good Housewifery (fourth edition: London, [1770]), 5-6.

[8] In a letter of 27 November 1764, Leopold explicitly mentions hearing street ballads (even if he found the experience tiresome): ‘Although the poor are generously provided for, there are vast numbers of them; few, however, risk begging in public since this is forbidden; instead, they have a different way of demanding alms, namely, by selling posies of flowers in summer, while others sell toothpicks made from quills, others again sell copper engravings or matches or sewing thread or different-coloured ribbons and so on. Others sing as they pass along the street and sell printed songs, which is the most common method and one that we quickly tired of hearing.’