Capital of the Austro-Hungarian monarchy and Holy Roman Empire, Austria, in Mozart’s time a city of about 200,000 inhabitants and the seat of two parallel governments. The Austro-Hungarian empire, ruled by the hereditary heir of the house of Habsburg included much of central and eastern Europe as well as territories in the Netherlands and northern Italy; the Holy Roman Empire included much of central and north Europe, its territories often overlapping with the monarchy, and was ruled by an elected emperor who, since the fifteenth century, had also been the Habsburg monarch. Maria Theresia succeeded to the Habsburg throne in 1740 and her husband Francis of Lorraine was elected Holy Roman Emperor; he was succeeded by their son, Joseph II, in 1765. Where Maria Theresia instituted reforms that improved schooling, the more progressive Joseph II abolished some aspects of serfdom and censorship as well as extending limited civil rights to Protestants and Jews, dissolved the church brotherhoods and simplified liturgical practice. These and other reforms gave rise to an educated middle class able to participate in the city’s cultural life.

Musical life centered around private performances, public concerts and opera. Private performances at the homes of the nobility were common; in March 1783 alone, Mozart gave more than twenty such performances. And during his time in Vienna, Mozart gave or performed at numerous public concerts, at the Burgtheater or Kärtnerthortheater – which were available for concerts during Lent - or at the Trattnerhof, Mehlgrube or some other venue. For the most part, the initiative for organizing these concerts was Mozart’s, who had to hire a hall and performers, and manage the sale of tickets, himself. Aside from the occasional private performance, opera was given at the Burgtheater or Kärtnerthortheater. Originally the court theatre, the Burgtheater during the 1760s and 1770s was leased to entrepreneurs who opened it to the public; in 1776, Joseph II retook control of the Burgtheater, renaming it the Nationaltheater and installing a company that performed German-language plays and, from 1778, Singspiel; Mozart’s Die Entführung aus dem Serail K384 was written for the Nationaltheatre. The troupe was disbanded in 1783, though briefly reconstituted in 1785-1788 at the Kärntnerthortheater. The Burghtheater, in the meantime, was rededicated to Italian opera: as a German composer, Mozart was particularly successful in gaining commissions for Italian opera, which was largely the province of Italian composers. Private theatres, such as Emanuel Schikaneder’s Theater auf der Wieden, for which Mozart composed Die Zauberflöte K620, operated in the suburbs. With respect to church music, Joseph’s reforms limited the opportunities to compose and perform liturgical music and Mozart completed no new church works specifically for Vienna during his decade there. 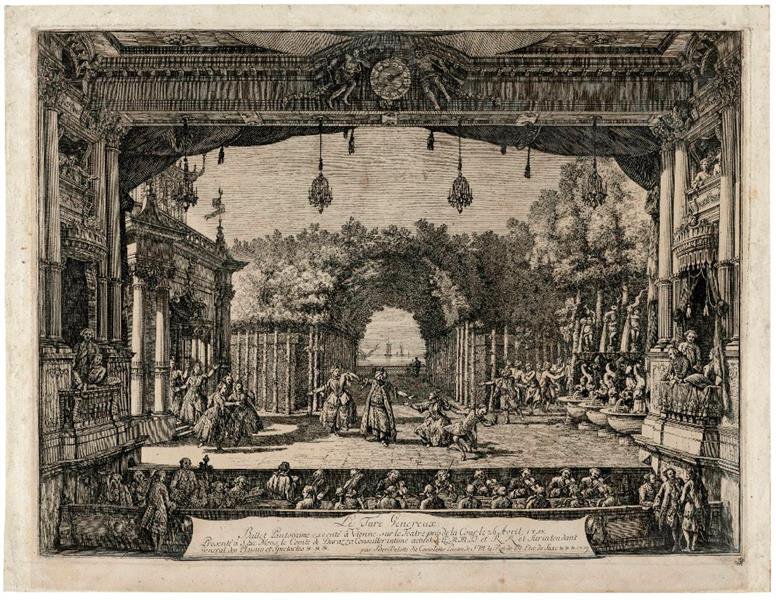 Bernardo Bellotto, A performance of the ballet Le Turc généreus at the Burgtheater, 1759

Mozart first visited Vienna in the autumn of 1762. He subsequently visited from September 1767-December 1768, in 1773, and he took up permanent residence there from March 1781.