Saint. Born Catherine de' Vigri, St. Catherine entered the Corpus Domini convent, Ferrara, in 1426; in 1432 she found a monastery of the Order of Poor Clares, where in 1456 she was appointed abbess. Buried without a coffin in 1463, her body was later discovered to be incorrupt; it was installed on a golden throne in the Cappella della Santa, Bologna. She was beatified in 1524 and canonized in 1712. St. Catherine is the patron saint of artists and of Bologna. 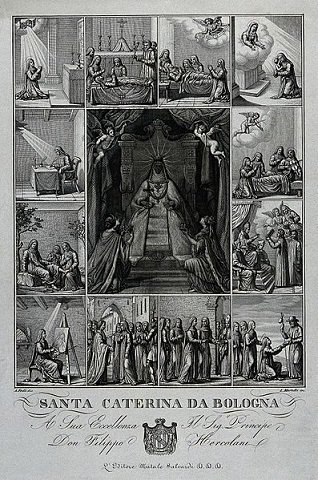 Mozart and his father visited Bologna twice: from 24-29 March 1770, and from 20 July-about 13 October 1770. Their visit to the Convento del Corpus Domini di Bologna, where the body of St Catherine is preserved, must have taken place during the first visit since Leopold wrote to his wife from Rome on 14 April: